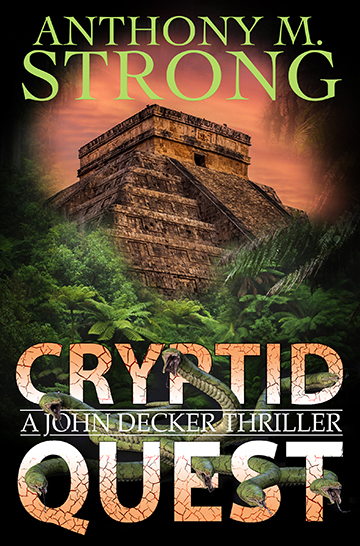 Deep in the Amazon jungle, a world beyond imagination.

In the dense and dangerous Amazon, the crew of the supernatural reality series, Cryptid Quest, makes a stunning discovery. A Bronze Age fortress of Mayan design, hidden by impenetrable jungle and far from where it should be. But that’s not all. They also find tantalizing evidence of Egyptian and Greek influence—An impossible collision of ancient cultures that leaves them baffled. Then, without warning, they disappear without a trace.

Determined to find out what happened, John Decker travels to South America. Arriving in the humid Amazonian jungle, he joins a team of specialists pulled together from all corners of the globe, including a ghost from his past—An old flame he thought was out of his life forever.

But this is the least of Decker’s worries because when the group treks deep into the overgrown and unexplored jungle, they find themselves trapped in a forgotten land where death lurks around every corner, and the nightmares of the ancient world live on. Cut off from civilization, and under siege, they must solve the riddle of the ancient ruins and find a way out, or die trying…

Cryptid Quest is part of the John Decker series, however, each book is a standalone novel and does not require you to have read the other books in the series.